Report a problem with this listing

Weddings Design Element Flowers is one the leading Manchester Wedding Florists in the North West. With over 30 Years experience. With many awards from Chelsea Gold Medals, RHS Chelsea Florist of the Year, BFA Florist of the Year and also Interflora Florist of the year to name a few. Our Wedding designs are created to keep everyone's attention centered on you, the bride. Without exception flowers are the stunning finishing touch to all weddings. Beautiful flowers ensure the bride and groom remain the focal point throughout the day.

Themed designs from buttonholes to grand arrangements set the scene. From the moment we deliver to your home, to when you walk down the aisle, say thank you to mums or dance the night away - flowers do it all, every step of the way.

Design Element Flowers Design Element Flowers is co-owned By Neil and Anthony. We supply fresh "FLOWERS with PASSION and STYLE" to the Manchester area and worldwide via the Interflora relay service. We have been based in Irlam since 1981 and are proud to have a fully trained, well-qualified and experienced team that strives to give our customers the very best in service, style and design.

Co-owner Neil Whittaker has studied all over the world, gaining his National Diploma of Floristry (NDSF) in 1998, and his American Institute of Floral Design (AIFD) qualification in 2000. In 2010 he won the Croatian National Championship, just days after finishing an impressive seventh in the world at the Interflora World Cup in Shanghai in 2010. Neil repersented the UK in Shanghai in the Interflora Worldcup 2010 and was placed 7th in the world and also became British Florist Association Florist of the Year 2007 and again in 2010. Interflora Florist of the Year 2007, 2011 and 2013 at Tatton Park RHS Show and went on to represent the UK in the Europa Cup Floristry Championships in the Czech Republic in September 2011 where Neil took the Bronze Medal in Europe. Neil also represented the UK at the Interflora World cup in Berlin in 2015 and was placed 1st Runner Up in the World.

Neil Whittaker is a seasoned competitor, with national and international titles and plaudits stretching back over many years, including fourth place (the best ever placing by a British competitor) at the Europa Cup in Slovenia in 2007, and second at the world floristry finals in Manila, Philippines in 2000. He also travels extensively both nationally and internationally, demonstrating his unique style and teaching floristry at all levels from absolute beginners to one-to-one tuition for experienced florists. Neil was very proud to be listed as one of the top ten florists featured in "The Independent On Sunday", and his work has also been published in many magazines over the years, including "The Best of British" and "The Spirit of the Rose" design books, along with industry journals, DVDs and online.

After several years working in international retail, co-owner Anthony Williams trained with Neil and has worked with him since 1990, gaining his NDSF qualification in 2004 and AIFD in 2005. He now demonstrates and teaches all over the UK and Ireland, and regularly tours Poland and Spain. His understanding of competition requirements is much in demand and he has assisted Neil and other UK representatives at international level including the World Cup, Europa Cup and Eurofleurs competitions.

Both Neil and Anthony are proud to be amongst the few florists to have both achieved these combined qualifications in the UK, and their belief in the value of training and qualifications was reflected in the Gold Medals won by the shop at the RHS Chelsea flower shows in 2003 and 2004, in addition to Neil's individual success in 2009.

They have been featured on many TV shows including "Shopping City", "The Sack Race", and "Lunch Time Live" and "The Flower Show" for UK Style, as well as on coverage of the flower shows at Chelsea and Tatton. They are also regular contributors to BBC Radio Manchester, and to floristry industry news/training media. 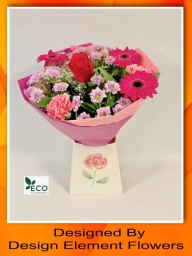 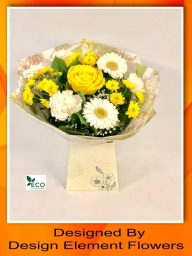 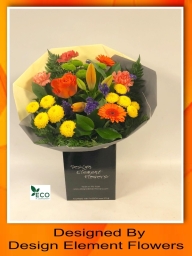 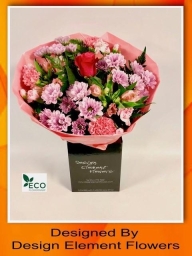 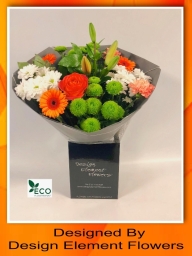 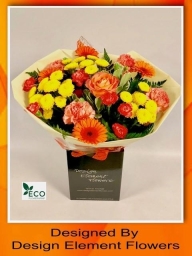 Testimonials are curated by Design Element Flowers and are not independently reviewed or verified.

Me and my beautiful wife Kelvia chose Design Element Flowers, after my sisters glowing recommendation. We were not disappionted and in fact absolutely ecstatic and now so greatful for their work on our wedding day. The Flowers were absolutely beautiful, I'm not going to lie, I know nothing about flowers but that's what Kelvia told me and a lot of guests.

Personally for me the most pleasing aspect was how warm and welcoming they were for me and Kelvia, the fact they put in the extra effort to meet us when we needed. Also that they were so well organised which is imperative for anybody trying to keep their sanity during a wedding.

Neil and Anthony and their work colleagues are a pleasure to be around and provide an outstanding service. Couldn't recommend them highly enough, thank-you very much from me and Kelvia."

"I wanted to say a huge thank you for the beautiful flowers. They were even more gorgeous than I had imagined and completely transformed the venue.
Clare (the organiser) was so impressed with you and the quality of your work. ...and all my guests said how beautiful everything looked.

I will send on some pictures soon....but really, can't thank you enough

Is this your business?!